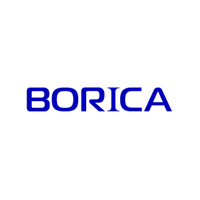 Borica is a manufacturer of organic titanate and zirconates . Their production facilities are located in China and Taiwan. Borica was started in 1999 and it was a result of a MBO of ICI Taiwan.

The Tytan product line of titanates and zirconates are used in coatings, adhesives, inks and in polymer production.

Catalysts: TYTAN manufactured by Borica Co., Ltd. from Taiwan, is the leading range of Organo-Titanate and Organo-Zirconate based catalysts. Borica is committed to providing the chemical industry with a complete range of high performance catalysts delivering to your site through our global logistic network.

Industrial Coatings: TYTAN titanates istrongly improve adhesion to metallic substrates through covalent bonding, cross-linking the functional groups of a wide variety of resin binders and acting as coupling agents for pigments and fillers. This allows formulators to develop coatings for a wide variety of binder systems that have the necessary adhesion and anti-corrosive properties to withstand the toughest requirements of today’s general industrial, chemical and transport industries.

TYTAN Organo-Titanates are particularly suitable for improving the properties of coatings with silicone based binders, due to the synergistic chemistry of titanates and silicones.

Oilfield Chemicals: TYTAN Zirconates/Titanatactes act as cross-linking agents for guar derivatives. They provide hydraulic fracturing fluids with excellent capabilities of propagating the fracture by transmitting hydraulic pressure to the formation and transporting the proppant into the created fracture.

Catalysts for Polyurethane: Polyurethane is produced by the polyaddition reaction of polyisocyanate with polyalcohol (polyol) in the presence of catalyst and other additives. Many types of catalysts have been used for polyurethane manufacture, such as compounds of tin, mercury and organic amine compounds. The most commonly used is the tin compound. In many applications, metal catalysts are preferred because they are efficient and effective. For decades, organotin was commonly used as the preferred polyurethane catalyst due to its high activity and good compatibility in most formulations. However, these catalysts, are not favored due to increasing regulatory awareness. This has driven the formulators to search for non-tin alternatives.

TYTAN CA-B116 is a bismuth-based catalyst used for curing a wide range of polyurethane formulations. TYTAN CA-B116 provides much reduced environmental concern and toxicity with higher selectivity and less gassing in the presence of moisture. They are recommended in the area of coatings, adhesives, sealants and elastomers (C.A.S.E.). Furthermore, TYTAN CA-B116 can be used in both one and two component formulations for both ambient cure and heat cure systems.

As a comparison, silane coupling agents only reacts with hydroxyl groups on the filler surface via water condensation of silanol-siloxane process, therefore it is suitable for glass, alumina hydroxide, magnesium hydroxide etc. The advantage of titanate coupling agents is that they not only react with hydroxyls, but also the free protons on the inorganic interface, which results in the formation of organic monomolecular layers on the inorganic surface forming the bonding for polymers.